do you feel pressure to be the perfect parent?

On a group coaching call I was recently leading for our Tactical Magic Mastermind, a stay at home mom who used to be a lawyer talked about how much energy and joy she was getting out of doing a home improvement project. It was a fun creative outlet and she said; “Plus I feel like I’m finally doing something tangible for my family.”

This led to a conversation about how much our society under-values caregiving, and how many women (and men) who are full time caregivers have internalized these messages. It can be hard to connect with a sense of self-worth and validation when you aren’t being paid money to do a job. On top of feeling under-valued, many parents are really hard on themselves.

Pressure to be the perfect parent.

This woman also shared how she was the; “worst mom ever” because she forgot to pack lunches for her kids one day. The school called, her little one was crying and she felt so bad that she started crying too!

When she shared this story, it just so happened that another woman on this group call was a former principal at an elementary school. This former administrator said; “I worked inside the school system my whole career, and guess what? This happened several times a day with multiple kids. Every single day, there were several families who would forget to pack lunch.”

Suddenly, the “worst mom ever” looked up at us all in a hopeful, vulnerable way. She was so happy to know she wasn’t alone.

The former principal went on to share an incredibly touching story about a young boy whose parents never picked him up from a sleep away camp.

As 3pm turned into 5pm and she still hadn’t heard from this boy’s parents, she couldn’t believe they wouldn’t show up. She had all these assumptions about their family when she called the boy’s home and learned his 16 year old sister would pick him up. The girl arrived with a baby in a stroller and a toddler holding her hand. Her young brother ran up and hugged her and the big sister held him tight to her chest and said; “we all missed you so much!”

The principal stood back and witnessed all the love they had for each other. Then the 16 year old said; “Mom was at her second job and couldn’t make it,” and the boy nodded his head in understanding. He wasn’t upset at all. The principal recognized her own white privilege and the unfair assumptions she’d been making about the parents’ commitment to their children.

She said this was a turning point for her as a mother as well.

Witnessing this moment in another family helped her shed all these should’s that she had for herself as a mother and instead focus on the relationship, the love and all the important things.

She shared; “My house was messy and we did have bad meals like Mcdonalds more often than I would’ve liked, but my kids were fine, they were privileged in fact and they had everything they needed to be successful adults. That’s what’s important.”

All that really matters is that your child knows he or she is loved.

Maybe your kid doesn’t have a sweater and it’s raining, or you missed their performance…there are a million little things and it’s easy to drop the ball when you’re trying to be the perfect parent. Self-criticism can rear its ugly head (try this self-compassion meditation when it does!)

So here’s a new checklist for all you moms and dads out there: 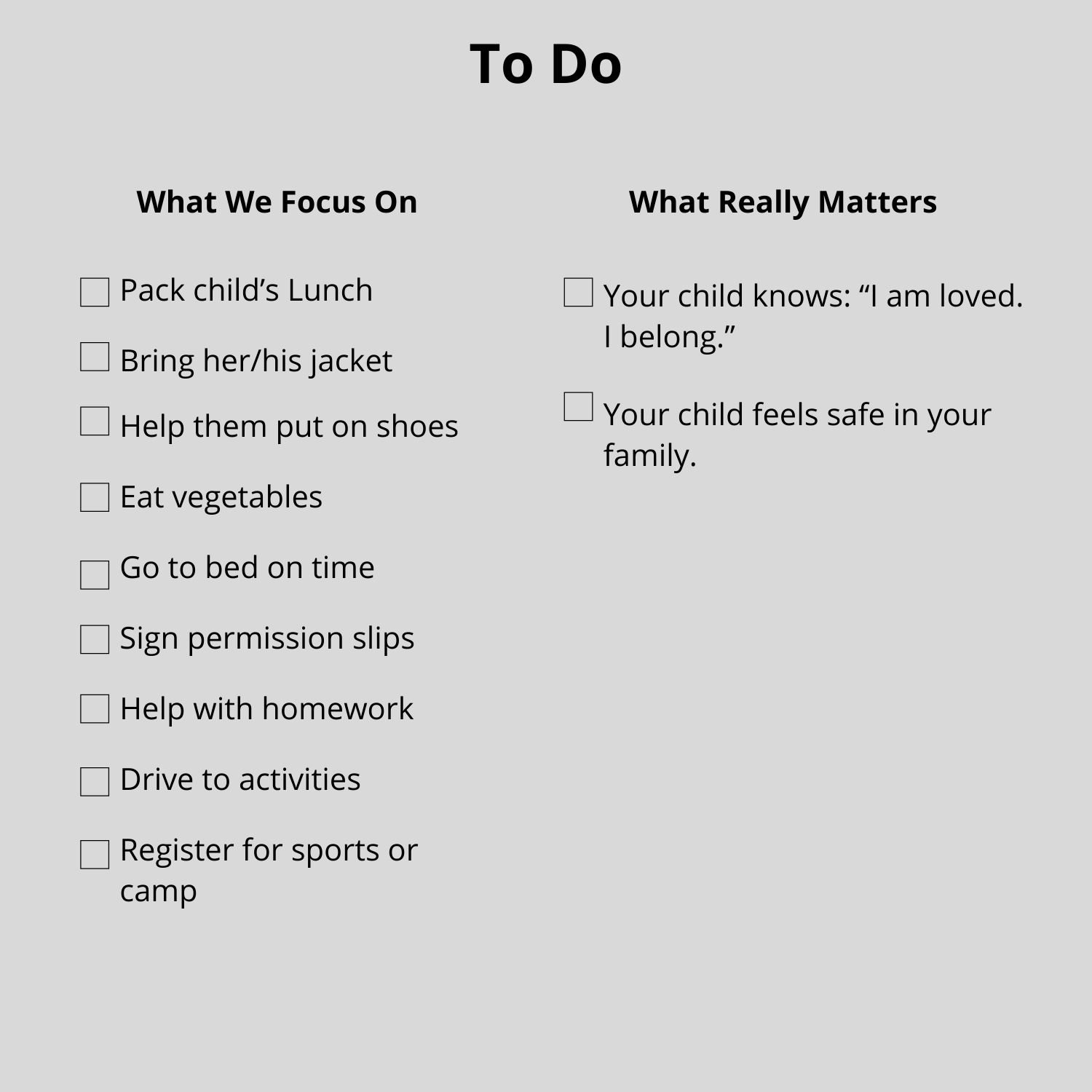 My dear friend Celina likes to say that she’s trying to be the “world’s most average mom.”

I love this expression because it takes some of the pressure off.

Ironically, while I was teaching this group class about allowing ourselves to be imperfect parents, I had to jump off the line early because I’d forgotten to sign my son in to preschool that morning. And instead of being annoyed or hard on myself, I just laughed and remembered that what really matters is he knows he’s loved. That’s all that counts in the end.

So today I ask all of you, how are you hard on yourselves? And how can you lower the bar whether it’s in parenting or in life in general? What are the things that really count, that truly matter to you and how can you focus on those areas more rather than the million little things that need to get done each day?

Wherever you are in the world, I hope you know that you’re doing a great job at life.

P.S. If you’re not a parent yet but know someone who is, please forward this article to them! It could help them take the pressure off and remember what really matters.

And stay tuned for an upcoming companion article on the “Ideal Worker.” It’s another pervasive and unhelpful standard we hold ourselves to that creates a ton of misery. I’ll be sharing what you can do about it!

P.P.S. Don’t forget to register for our FREE Live online event this Valentine’s Day. I’ll be sharing some tools and daily practices to re-wire your brain for happiness and love, you don’t want to miss this 30 Minute Self-Love Boost! 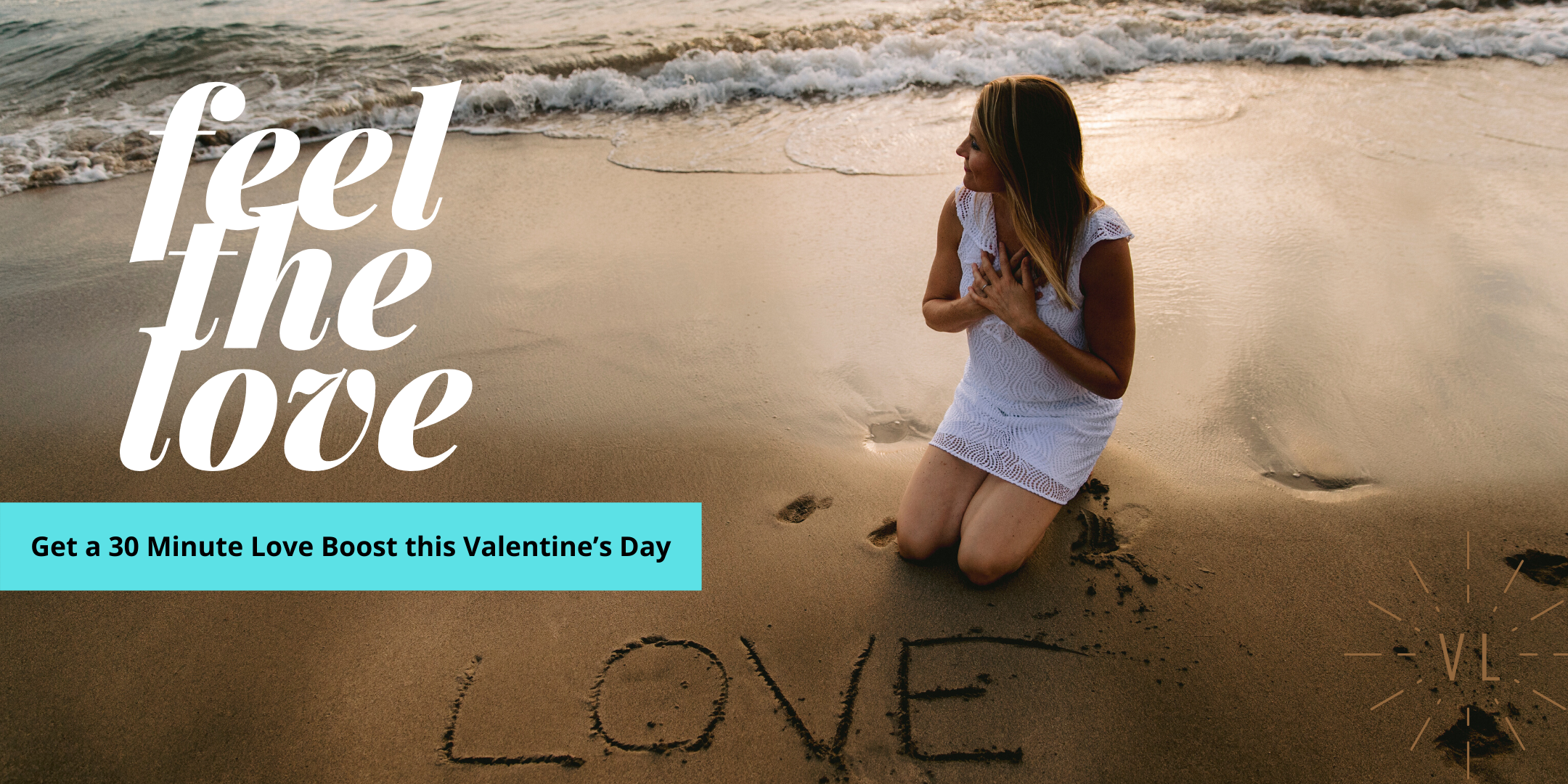