Are You Unwittingly Supporting the Presidential Candidate You Detest?

Many people are feeling anxiety and even panic about the election. There is so much fear, you can smell it. Those who support the current President and those who abhor him are both full of tremendously strong energy.

You may be unwittingly contributing to the success of the candidate you detest.

The law of attraction suggests that wherever you put your attention and focus will magnify.

Have you ever thought about a certain color or model car, and then seen it everywhere? You can try this out as an experiment, pick a type of car that’s a bit random like a light blue Subaru, and notice how it starts showing up wherever you go.

When you don’t want to see something, and you think about avoiding that thing, you end up seeing it too. Like if I tell you right now; “Don’t see a pink elephant in your head,” what happened?

This is exactly what we’re doing with the presidential election.

By saying; “I don’t want that person to be President,” you’re actually supporting that person on an energetic, subconscious and vibrational level.

Think of it like this — Race car drivers are told not to look at the curve in the road when they’re going 150mph because staring at the curve makes them more likely to hit it.

Instead, they’re taught to focus their gaze on the straight part of the track just on the other side of the bend.

Similarly, imagine the candidate you abhor is like a huge boulder in the middle of the road that we need to collectively NOT look at or put our attention or energy towards. 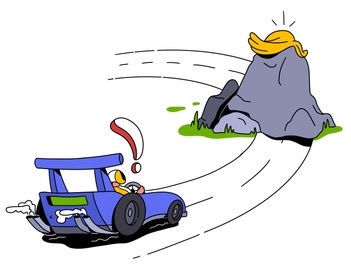 For those of you who have ever been pregnant, have you noticed how suddenly there are other pregnant women everywhere you look? And for those of you who have had the difficult and painful experience of trying to get pregnant unsuccessfully or dealt with a miscarriage or infertility issues, have you also noticed how you found yourself nose to nose with a plethora of pregnant women or little babies everywhere you turned? It’s truly miserable.

Here’s the catch with the Law of Attraction; your subconscious mind doesn’t differentiate between what you do want and what you don’t want.

If you think; “I love yellow flowers, they’re so pretty.”

So, when you think; “I don’t want that person to be President,” you are actually sending a signal to your subconscious and to the Universe to elect that person as the President.

You can choose love or fear, but not both.

If you’re focused on drama, racism, hatred, the poor handling of the epidemic, the destruction of the environment, and the overall incompetence of a leader, you’re manifesting more of that.

If you’re focused on peace, love, kindness, compassion, generosity, acceptance, the qualities of leadership you admire, people who inspire who, and your positive vision for the future, you will manifest more of that.

It really is this simple.

Look around the bend.

Focus on the straight away by imagining positive possibilities for our future.

By trying to avoid him, many liberals magnified his power.

When we wallow in drama, fear, hatred and grief, we multiply it.

We’re all just little bunnies doing the best we can.

And we can change this pattern immediately, starting today.

We’re all powerful at manifestation and you can turn a big ship on a dime. I promise, it’s possible.

Don’t spend your precious life force focusing on things that disturb you or fighting hate with more hate.

Instead, lean into what feels good. Here’s how:

3) Name and Shift Your Negative Loops

When you get stuck in a negative loop, name it and shift it.

It’s important to stay in touch with your own feelings.

Be careful — Sometimes looking at something you want puts you energetically back into focusing on what you don’t want.

For example, if looking at a picture of a leader from the past makes you sigh in despair and think; “how did we fall so low?” this puts you right back down that rabbit hole of negativity.

It would be more productive if you simply looked at pictures of ice cream sundaes. I’m serious. 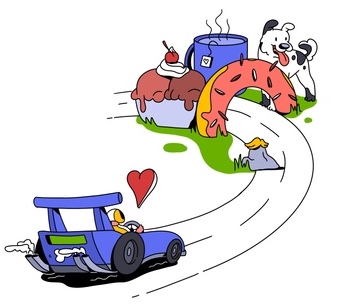 If you can’t focus on positive leaders without feeling despair, then distract yourself with something, anything, that feels good.

The point is to stop investing negative energy and attention into the election and to instead put your focus on something, anything, that feels good. Watch funny cat videos. Hug a puppy. Light a nice smelling candle. If you’re inside, go outside. If you’re outside, go inside.

Do anything to support your nervous system in feeling relaxed and joyful.

This is one of the most important things you can do to impact the results of next week’s election.

Stay focused on what feels good. Do not get sucked into other people’s drama.

If you notice yourself going into fear, anger, despair or grief, bring yourself back up the vibrational scale by thinking a better feeling thought or by distracting yourself with something that feels good.

Life can be full of joy, wonder, compassion and generosity. It must start within.

The more you hold a high vibration, the more you will inspire others to do the same. Together, by staying focused on feeling good, we can attract better leaders and a better world.

Remember; regardless of who you support, are you choosing fear or love?